The currently owned building by Piraeus Bank, was originally built for the Bank of Thrace-Macedonia.

The façade of this building was covered by our owned quarry Eurotravertine as selected by the acknowledged architectural team of Tombazis group several years ago (1991) and is still being acclaimed as the most elegant modern building in Thessaloniki.

The building was developed by the Bank Owners as their headquarters and required at their exterior façade the presence of a luxurious natural travertine material contrasted with a red finished Greek marble. 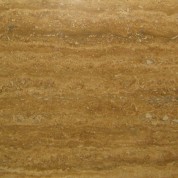